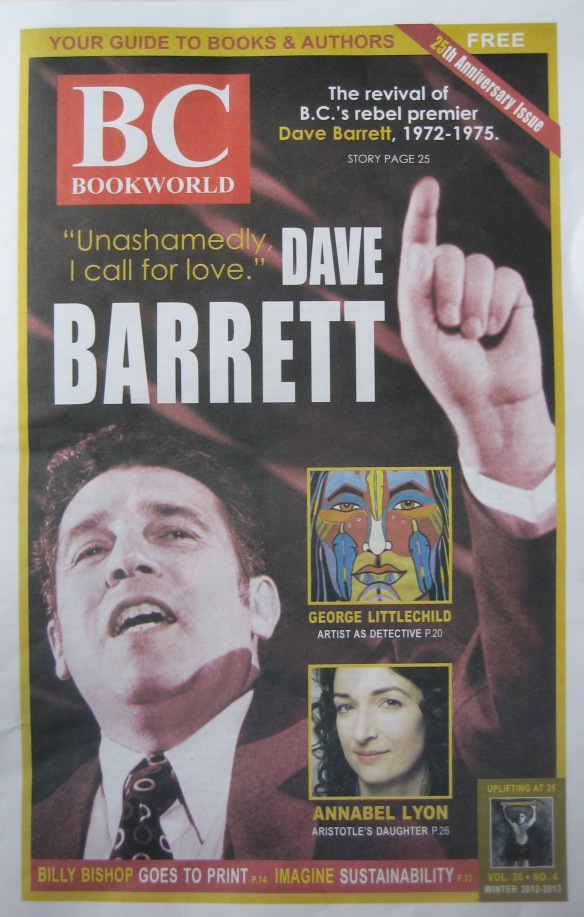 “I’ve spent the past two years writing a book for myself and one reader.”

Twigg is famous in the B.C. publishing world, and rightly so. He has turned his passion for B.C. and its writers into his life’s work. In 1987, he founded the quarterly literary newspaper B.C. BookWorld, which is chock-full of stories and book reviews about B.C. authors and their work. He continues to be the principal writer for this publication, with partner David Lester in charge of editing and production. Twigg has also created the online resource http://www.abcbookworld.com . This site now lists over 10,000 B.C. authors. It is searchable by author or by title and provides a veritable treasure trove of information on these authors and their contributions to B.C.’s historical and cultural landscape.

Twigg mentions that he is a fifth-generation B.C. native, but he acknowledges that most people are immigrants here, and claims that even if you aren’t from here, “B.C. will rub off on you.” He claims that we have “a psychological zone” here that is very different from most other places on the planet. Twigg relates a few anecdotes to illustrate how little of B.C.’s history is taught in schools. It is the authors Twigg promotes unflaggingly through B.C. BookWorld who have shared Twigg’s sense of wonder about B.C. through their research and the books they’ve created.

In a sense Twigg’s pride in B.C.’s writers is ironic because he admits that in the hierarchy of international publishing B.C.’s publishing industry doesn’t even make it to “the bottom rung of the ladder”. Internationally, the top places are New York, London, Frankfurt, and a few other cities, with Toronto positioned somewhere near the bottom of that ladder.

Twigg calls this situation the “outsiderism” of B.C. Yet, he goes on to ask, why should we complain or care if a B.C. writer never makes it onto the cover of Quill & Quire? [a Toronto-based literary magazine]. We don’t care because we have our own B.C. BookWorld.

Twigg is proud of what he calls “the huge appetite for B.C. BookWorld”. He describes B.C. BookWorld as an educational newspaper containing “deeper news”. In his conception, books are a form of “cultural news”. The online site abc.bookworld.com is now getting about a thousand views a day.

In everything he says, Twigg conveys the idea that successful writing is not reflected by the number of readers but by the quality of readers. The whole question of how many readers a writer needs is related to Twigg’s conviction that B.C. writers don’t have to be ashamed that they don’t publish in the “power centres” of publishing. He does concede, however, that if you’re a writer who wants to be rich and famous, you’d better go to New York, London, Frankfurt, and other top publishing cities.

In one of his more outrageous statements of the evening, Twigg expressed his opinion of readings and literary festivals: “Readings are a ridiculous bastardization of literature.”

Why? Because both reading and writing are private activities, according to Twigg, who believes that “writing is underfunded because it’s not a spectacle,” like other arts such as dance and theatre.

(I should add that Twigg muttered some disclaimers, such as “I have nothing against the Vancouver Writers Fest” along with his statements about readings.)

Although I agree with him that the serious business of writing and reading books happens in private, I enjoy attending readings. Most people are curious to meet the authors of books they like. They want to compare the writer’s “voice” with the real person, and perhaps to gain some insights into the creative process and technical aspects of writing. Also, oral storytelling is an ancient art, and a writer who reads his book well can enhance his audience’s appreciation of it. Getting a “taste” of a book through a public reading often leads me to buy it (or at least read it!).

When I suggested that writers could gain international readers for their books through e-publishing, Twigg responded with scorn. He thinks e-books are putting independent bookstores out of business because they are so cheap. I agree with him on this, but I don’t agree with his opinion that people don’t really want e-books and have just been seduced by low prices and the persuasive marketing of e-readers. E-readers are here to stay because many people appreciate their portability and convenience.

However, I agree with Twigg that virtually every writer would prefer to be able to hold his own book in his hand. A physical object isn’t the same thing as words on a computer screen. Twigg is quite supportive of self-publishing, acknowledging that many high-quality books are now produced this way. One advantage of self-publishing is that writers have more control over the design and production of their books. Twigg sees self-published and print-on-demand books making up an ever-larger percentage of books.

Twigg encourages writers not to be overly concerned about how many copies of books they sell. Writers (and the readers they most want to have) are motivated primarily by their desire to create and appreciate art. This must be the reason Twigg, a self-confessed “private person” is willing to work so hard to promote the writers he believes in. After all, as he concludes, “Life is empty without art.”

I’ve been thinking a lot lately about how much solitude is ideal for writers. In part, this is an ongoing problem for me because there is this constant conflict between how much time I spend creating (pondering ideas and punching them into the computer), how much time I spend absorbing (reading books, newspapers, online articles) and how much time I spend socializing (sometimes in person but often online, and though this can be educational or stimulating or fun how much is too much?).

Recently, I wrote a snail-mail letter (because it was Christmas) to a friend (I’ll call him James) who interpreted what I had written as a request for writing advice. We ended up having a phone conversation about it. He feels very strongly that writers need to be alone most of the time. For him, socializing is almost always boring, a complete waste of time. (I think his mind is too brilliant to find a match with the vast majority of other people’s minds.)

Though it is true that the actual writing gets done when we’re alone, I don’t agree with James that writers have to be completely withdrawn. We get a lot of our ideas from both interacting with others, and being observers and eavesdroppers.

I’m sure most writers are like me in getting inspiration for fictional characters from real people. Sometimes it’s better when you know a person only slightly—but something about that person utterly seduces you or puzzles you—and you can go on to let your imagination build a whole character from the few tantalizing things you know about the real person. I’ve heard some writers say that they lose control of their characters—the characters “take over” the story and it goes places the author never planned.

How important is it for a writer to have an audience—his readers? Of course we all want to write a bestseller that millions of people buy so we can get rich, but do writers also get a reward simply from the act of creation itself?

I went to a Canadian Authors Association meeting last night in Vancouver, where B.C. BookWorld publisher and writer Alan Twigg gave an inspiring talk (in his inimitable provocative style) about B.C.’s writers and publishing scene. He began by telling us he’d been writing a book for two years that was intended for one reader. [I’ll be writing more about Alan Twigg and B.C. BookWorld in another post.] He segued into other topics, but later I reminded him about his “one reader” comment. I said that most writers, even if they didn’t care about becoming rich and famous, would rather have a hundred readers or a thousand than just one. Most people around me nodded.

After all, don’t we write in large part because we want to share—our experiences, our imagination, our unanswerable questions and partial answers? When James talks about writers’ solitude, does he mean the purest writers don’t care about having an audience at all? Is the purest writing done for oneself alone?

I don’t think so. Writing is an attempt to capture truth and beauty—which we each do in our own way, though Keats wrote a long time ago:

Beauty is truth, truth beauty—that is all
Ye know on earth, and all ye need to know.

Did James mean that in writing one shouldn’t be corrupted by what others want or expect? One should write exactly what one means from the depths of one’s solitude? Then others can make of it what they will. A writer with integrity will want to express himself as precisely (in meaning) and as beautifully (stylistically, in his own voice) as he can. The “masses” may not approve of or understand what comes out. That doesn’t mean the writer doesn’t care what anyone thinks. Surely most writers have peers (as well as people they consider to be superior to themselves in terms of wisdom, knowledge, writing skill, talent, and experience) and the opinions of these people will “count”.

We want not only to share, but to receive feedback. Most of us aren’t egoless, and we like pats on the back. Also, everyone can improve at any skill, including writing, and there must be few writers who can’t benefit in some way from the feedback of others. But I guess James is right that the initial effort has to be the effort of a single mind, not a committee.

I liked the challenge James suggested to me, though—his idea of “what it takes” to be a fiction writer:

I am reluctant to run advice past you that wouldn’t be worth anything unless you know somehow somewhere you have that feel of “ok, I want to put five years into this fiction business. See what I got. Throw the dice, accept the consequences. I refuse to sit around and bark all day.”

Alan Twigg expressed a similar idea of the writer’s compulsion to write: “You will be a writer if you can’t not write.” He went on to explain—“We have needs…hunger, sex, and then there’s art. Life is empty without art.”

February Blues: Here is a quote from Shakespeare’s Much Ado About Nothing, from Act V, Don Pedro speaking to Benedick: “You have such a February face, so full of frost, of storm and cloudiness?”