A couple of weeks ago I found two books at my local library using one of my common techniques for choosing books—browsing randomly. These books were in a corner of the library set aside for a summer reading club. This summer’s theme is “Walk on the Wild Side.” Two books piqued my curiosity and I checked them out. 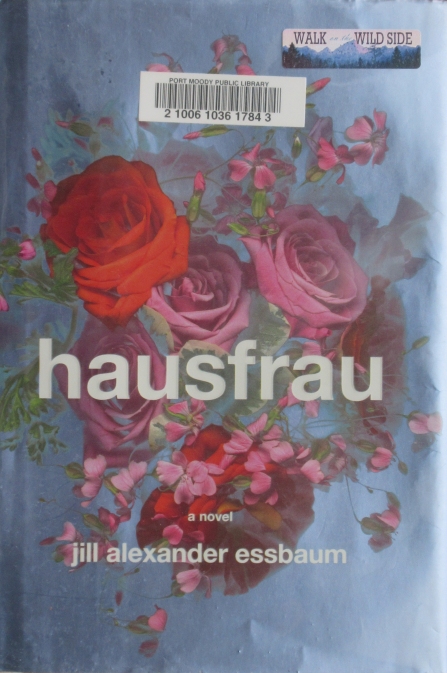 I first read Jill Alexander Essbaum’s Hausfrau. The back cover blurbs suggested that the novel could be compared to a modern Madame Bovary or Anna Karenina. High praise, indeed, and all the blurbs gushed about Essbaum’s masterful writing.

As I started reading, I wasn’t disappointed. Hausfrau is the story of an expatriate American wife, Anna, living in Switzerland with her Swiss husband Bruno and their three young children. Anna is not happy; after nine years in Switzerland she still feels herself to be an outsider and has no close friends. She is bored, without personal ambition or direction, and feels distant from her husband. At first I found her story compelling, mainly because it includes a lot of well-written sex scenes. Anna starts an affair with a fellow student in her German class. Only weeks later she gets drawn into another affair, this time with a family friend.

But Hausfrau is not a steamy romance or an erotic novel—it is neither of these. Essbaum is asking serious questions about how a woman creates her identity and becomes fulfilled. What roles can marriage and extramarital sex play in that process? What is love? Why does Anna feel so isolated? Why is she so troubled by the question of what comes after death? She has regular psychotherapy sessions with a Doktor Messerli, and their conversations make up many scenes in the book. Yet the psychotherapist seems unable to draw Anna into a state of greater self-awareness, or penetrate her depression.

Hausfrau engaged me completely and in that way it is a successful novel. It made me think not only about the questions above, but about how my reactions to the book changed as I continued reading it. I’m fascinated by the fact that different readers analyze and respond to the same book in different ways. For example, the jacket cover calls Anna an “electrifying heroine,” and a blurb on the back compares her story to the nineteenth-century heroines of Madame Bovary and Anna Karenina. I, instead, found myself puzzled and frustrated by Essbaum’s Anna. In my view she was unbelievably passive, and strangely indifferent towards her husband, lovers, and friends.

What I didn’t understand about Anna is that she has tremendous sexual energy, but seems unable to transfer any energy or joyfulness to other areas of her life. The sex scenes are powerful and erotic—yet the overriding message seems to be that sex is, for Anna, her only form of escapism and self-affirmation. At one point Doktor Messerli asks Anna what she is good at. Anna thinks, but doesn’t say, that the only thing she is good at is fucking.

She feels no emotion for her sexual partners; in fact she knows little about them and has no interest in getting to know more. Also, there seems to be no adequate explanation of what has gone wrong with Anna’s marriage to Bruno. Why are they so distant? There is one scene in the book where they have wild, rough sex after a party, and it’s clear that Anna still finds him very attractive, physically. Yes, they have their cultural differences, but Anna knew that going into the marriage.

Why do Bruno and Anna seem to have no interest in strengthening their marriage? There is one scene where Anna’s pseudo-friend Edith (a thoroughly unlikeable character) says she doesn’t have a clue what her husband does at work; Anna admits that she knows nothing about Bruno’s work, either. Anna says, “We should care enough about our husbands to know what they do.”

Edith replies, “The only thing we need to know is this: they bring home a paycheck.” So Anna, passive though she is, feels more compunction than Edith; Anna at least recognizes that this level of disinterest about one’s life partner is callous and strange.

One clue about Anna’s distance from Bruno is a backstory about an affair she had with a man named Stephen a couple of years before the present-day events of the novel. Of all the men mentioned from Anna’s life, Stephen was, apparently, the one she loved passionately. In fact, we learn that Anna’s third child is actually Stephen’s daughter, not Bruno’s, but Anna has never told anyone this. Stephen left Anna for a job in the States. He never wanted Anna to be a permanent partner. She wasn’t realistic about what she meant to him.

As I progressed through the book, I continued to be drawn in by Anna’s predicament but I was increasingly frustrated by her apathy. To me, comparisons with the heroines of Anna Karenina and Madame Bovary are not apt. Tolstoy’s Anna is passionately in love with Vronsky. She is the victim of the rules and conventions of her time. By choosing to live with Vronsky, she not only becomes an outcast from Russian society, but her petty bureaucrat of a husband bans her from seeing her beloved son. For Anna Karenina, every choice leads to heartbreak.

Emma Bovary is more similar to Anna in Hausfrau, in that both are unhappy and bored by their social environment. Both Emma’s and Anna’s first lovers (Rudolf and Stephen) don’t love them. But Emma is trapped in ways that the contemporary Anna need not be. Modern women aren’t severely limited in their choices the way women were in the nineteenth century. Emma’s provincial town has nothing to offer her in terms of personal development or stimulation. Also, Emma doesn’t love her husband or even feel any physical attraction to him.

Eventually Anna’s affairs can no longer be hidden, and can no longer shield her from some awful real-life events. Her son Charles dies in a freak accident. After that, Bruno finds out he’s not the father of their third child. He beats Anna up and then tells her she has to leave their home for a while so no one sees the marks he’s put on her. Now Anna has genuine causes for grief and desperation. Yet I still found her actions in the last part of the book inexplicable. How could she be so unhinged as to leave her purse and suitcase on the train? Why does she throw her cellphone—her last link to getting help—into the water? Is Essbaum implying that the only way out for Anna is suicide, as it was for Anna Karenina and Emma Bovary?

After reading most of Hausfrau eagerly, the ending left me dissatisfied and depressed. What was Essbaum’s purpose in writing it? In the end, the book seemed to convey messages only about failure: Anna’s failure to develop herself; her failure to find intimacy with others, including her husband, her lovers, or her friends; and the failure of the people surrounding her, including Doktor Messerli, to help her.

Despite the fact that Hausfrau disturbed me, the fact that it left me asking questions and postulating answers speaks to its success in engaging me. The novel seems real and honest, in part because it doesn’t shy away from exposing people’s darkest, weakest thoughts and actions.

It left me wondering how other people will react to Hausfrau and its “heroine.” How will they interpret the book’s conclusion? To me it gives a warning about the dangers of being passive—going with “the flow” of accidents and others’ choices without adequate self-awareness and reflection. Perhaps Anna should not have married Bruno. Perhaps she shouldn’t have had children. Perhaps she should have terminated her affair with Stephen early on, by admitting to herself that he didn’t love her the way she loved him.

When I was almost finished reading Hausfrau, I came across a quote from Maria Popova’s Brainpickings website. She quoted the prolific writer Robert Penn Warren (best known for his Pulitzer Prize-winning All the King’s Men) on the subject of “finding oneself” through taking time off from work or school to do extensive travelling. Warren’s words were:

. . . the self is never to be found, but must be created, not the happy accident of passivity, but the product of a thousand actions, large and small, conscious or unconscious, performed not “away from it all” but in the face of “it all,” for better or for worse, in work and leisure rather than in free time.*

Anna doesn’t make choices about her own work, productive leisure activities, or friendships. She only accepts, passively, the choices that others impose upon her. She never “finds” herself. Instead, she loses everything by leaving her suitcase on the train and willfully discarding her cellphone. It seems the only choice Anna is capable of making is that of self-destruction.