Today, I copied my WordNerds page from my running blog into this blog—because I know most editors are WordNerds! To view the page (with accompanying comments) in my running blog, or to read my running stories, please visit Nancy Runs & Writes here.

To view an explanation of what WordNerds entries are about, please visit my WordNerds (Intro) page.

From now on, WordNerds posts will appear chronologically on this blog page. 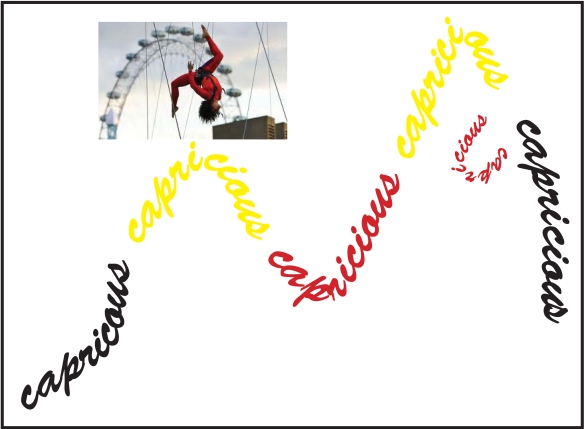 I’m fascinated by the connotations of words.

I was walking to my gym a couple of mornings ago, and the sudden cool weather and blowing leaves tossed the word capricious into my mind.

Right away I decided, “That word is going on my WordNerds page just because I like it.” Then I analyzed why capricious tugs my strings.

Moods can be capricious and so can weather. There are hints of darkness and unpredictability in capricious. The word suits my personality because I like complexity, hidden streaks, and spontaneity. A capricious person or a sunny day can change quickly, and the inevitability of change reminds us to treasure what we have in the moment.

The word capricious made me think of dancing, with its connotations of playfulness, joy, and improvisation.

These were my thoughts about capricious before I looked it (and its relatives) up in my trusty Canadian Oxford dictionary. It’s amazing how our brains construct connotations for words from all the contexts (real-life or literary) in which we experience a word. The following definitions support my intuitive understanding of the word and my emotional reaction to it.

capricious: 1 guided by or given to caprice. 2 irregular, unpredictable.

caprice: 1a an unaccountable or whimsical change of mind or conduct. 1b a tendency to this. 2 a work of lively fancy in painting, drawing or music: a capriccio. [French from Italian capriccio]

capriccio: 1 a lively and usu. short musical composition. 2 a painting etc. representing a fantasy or a mixture of real and imaginary features.

capriccioso: (adv. and adj.) Music In a free and impulsive style.

Isn’t this a perfect word? I would define it as the opposite of “sarcasm-lite”. According to my brother Alan Rooks, it was coined by Terry Fallis in his political satire The Best Laid Plans. I am optimistic that it will be entered into The Oxford English Dictionary in the not-too-distant future. How can it not be, when Canadian Oxford‘s second definition for the word “caustic” is “sarcastic, biting”?

I haven’t yet read The Best Laid Plans, though Alan assures me it’s a very funny book. It is a self-publishing success story: Fallis promoted it so successfully through social media that it won the 2008 Stephen Leacock Award for Humour. Only after that was it picked up by a regular publisher. You can read the story of the book itself as well as a critical review here.

I was a little taken aback a few days ago when I read a post on a blog called An American Editor entitled “On Books: Value in an eBook World.” (Read article here.) Of course we’re all familiar with the word e-book, but I hadn’t seen “pbook” used in this way before. I was also more than a little surprised that an article in an editor’s blog would randomly use the two spellings “pbook” and “pBook.” Ironic, I would say. I might even be tempted to be sarcaustic about it if I was in a bad mood.

Do my readers have any preference for spelling? pBook, pbook or p-book? Or should we reject the word altogether?

Recently I was thinking about dramatic changes in my personal and social life. People whose lives were once intertwined with mine are now…extwined. Except that there is no such word. I like the word that sprang into my head. I think it deserves to exist. It seems unfair that English has two words, intertwined and entwined, that according to both the Canadian Oxford Dictionary and Word’s English (United States) thesaurus are synonyms, yet the only antonym given for them is free. And though I’m happy that I’m free, that word is not, in my opinion, quite right as an antonym for intertwined.

After all, we have a related word, tangled, that has an obvious antonym, untangled, as well as another antonym, detangled, that refers specifically to hair from which tangles have been removed. Incidentally, entangled is another synonym for intertwined that Word’s thesaurus supplies. (The word unentangled could not be found, but that’s just as well.)

If English displays a strange absence of words (like extwined, which I’m trying to remedy; if enough people share this post it will go viral and perhaps extwined will be added to the next edition of Oxford), it also contains words that seem to be superfluous.

For example, in the July 15, 2012 Globe and Mail, book critic Aritha van Herk commented that Mark Haddon’s writing in The Red House showed “eerie percipience.” I had to stop reading. Percipience. Could I define this word? To be honest, no. I looked it up in my trusty Oxford. The noun form as written above was not defined, though it was listed. The definition for the adjective form, percipient, is as follows: “1. able to perceive; conscious. 2. discerning; observant.”

So from this information, how would we differentiate percipience from perceptiveness? Is percipience a superfluous word or is this one of the countless cases in English where there is a nuance of difference in meaning between the two words? Oxford suggests the answer, because it gives a definition of percipient as a noun: “a person who perceives, esp. something outside the range of the senses.” So perhaps percipience involves a kind of intuition in addition to ordinary perception.

Can anyone illuminate percipience further?

Wow! I sure couldn’t resist passing this one on. It describes the state of the moon tonight, on May 5, 2012. It means the moon is simultaneously full (the “syzygy” part) and as close to the Earth in its orbit as it ever gets (its “perigee”). This means that the moon will be “13 percent bigger and brighter than usual” tonight, according to Kate Webb’s article in Vancouver Metro.

I’m going to try to get a look at it at 8:38 p.m. as Webb suggests. When it’s just rising, the moon looks bigger, and is supposed to have an amber glow around it.

However, there just might be some clouds in the way.

I was thrilled to learn these two words that until yesterday were completely foreign to me. They came from an essay my son wrote for one of his Japanese courses, in which he analyzed the videogame El Shaddai: Ascension of the Metatron. To define them, I’ll quote directly from his essay:

Do all videogamers know these words? I never play videogames, but because of my son’s fanaticism I have enough exposure to games that I understand they include activities and text that aren’t part of the actual narrative of the game.

Administrone: LinkedIn member Lucie Hankey coined this word, defining it as ”a famous national dish of Italy, where you have to fill out forms in triplicate to buy postage stamps.”

Pusillanimous: I was reading something (?) where this adjective was used to describe a rooster. I knew I knew this word; but I had to look it up in the dictionary.

Canadian Oxford: “lacking courage; timid.” Surprise! The word is so ugly and evil-sounding to convey this meaning.

Pleonasm: The phrase “stupid black negroes” was supposed to be an example of this.

Canadian Oxford again: “the use of more words than are needed to give the sense. e.g. see with one’s eyes.”

OK, as long as the writer was referring to the word “black,” not the word “stupid.”

Globe and Mail reviewer Martin Levin (January 7, 2012) used this word in his description of  Kate Beaton’s graphic work Hark! A Vagrant. “…a delicious gallimaufry that makes mock of cows sacred and profane with equal relish.” Sounds like fun!

Canadian Oxford reads: “A heterogeneous mixture; a jumble or medley.”

I saw this on the front page of The Globe and Mail, December 17, 2011. The word was being used to describe people’s reaction to the movie The Adventures of Tintin that had just come out. I will define its meaning myself: It means to worship all things related to Tintin, the famous comic book character created by Belgian writer Hergé.

I liked the word because of its sound. Note how close it is to “tintinnabulation,” a word that means “a ringing or tinkling of bells.” A related word is “tinnitus,” the name given to “a ringing in the ears.”

(Oh-oh! Now I wonder if The Globe’s word also had a double “n”. I hope not because then the word wouldn’t fit on a Scrabble board.)

I picked this word from the same newspaper (December 17, 2011) because I had never seen or heard it before. The definition from Oxford is “A device that converts an analog signal into an encoded digital from, and decodes digital signals into analog form, used in telephone systems and in video systems for computers. [Blend of coder-decoder.] Clever! Well, I’ve revealed that I’m not a techie.

Oh, I just love the spooky sound of it! A phantom is a ghost; I also hear the echo of the word “fantasy.”

Here is the definition: “A shifting series of real or imaginary figures as seen in a dream or created as an effect in film, etc.”This word was part of a wonderful quote that actress Molly Parker gave in a Globe and Mail article. The quote comes from Joan Didion’s book of essays The White Album (1979) and goes like this:

“We live entirely, especially if we are writers, by the imposition of a narrative line upon disparate images, by the ‘ideas’ with which we have learned to freeze the shifting phantasmagoria which is our actual experience.” 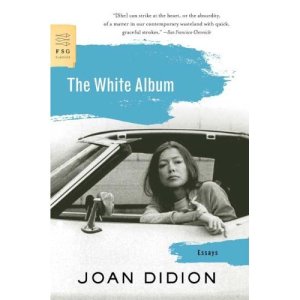 I like many French words. A lot of them have become accepted and familiar as part of the English language. This all goes back to the Battle of Hastings in 1066 when William of Normandy conquered England the the French-speaking Normans mixed with the Saxons of Britain.

Here is a French expression I saw in the December 31, 2011 Globe and Mail—reviewer Claire Messud used it to describe the main character in Teju Cole’s novel Open City:

A “flâneur” (italicized because it’s not yet considered part of the English language) is “an idler, a lounger.”

Another French word. I saw it recently and included it here just because I like the sound of it.

“1. Creation or construction from whatever is immediately available for use. 2. Something created or constructed in this way.”