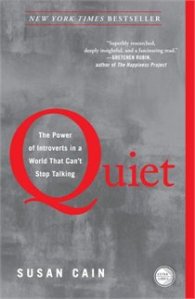 In her introduction to Quiet: The Power of Introverts in a World that Can’t Stop Talking, bestselling author Susan Cain writes, “If there is only one insight you take away from this book, I hope it’s a newfound sense of entitlement to be yourself. I can vouch personally for the life-transforming effects of this outlook.”

The reason I wanted to write about Quiet is because I believe it does have a message that can change people’s lives. In this book about introverts, I recognized myself, and Cain’s descriptions of introverts’ strengths gave me a new conviction about my abilities and how I can use them effectively.

Quiet is the result of years of research by Cain. Her work has exposed her to psychological explanations of introversion, both ancient and leading-edge, and to the latest research in neurobiology, which offers much evidence of brain differences between introverts and extroverts. Most compellingly, though, she writes that her work on Quiet has gone on “unofficially for my entire adult life.” An introvert herself, she is stunning proof of an introvert’s ability to succeed in a culture that seems to favour the extrovert’s personality. Cain was a lawyer for seven years, until she accepted that her real passion was to do research and help other introverts attain the self-understanding that would allow them to reach their potential.

Cain writes that although our culture’s “ideal” personality is extroverted, one third to one half of Americans are introverts. Carl Jung first popularized the terms “introvert” and “extrovert”. The two types differ in many ways, but in a nutshell, introverts prefer the inner world of thoughts and feelings, while extroverts are attracted to the outer world of people and activities. Introverts recharge their batteries by being alone; extroverts recharge by socializing. Studies of identical and fraternal twins have shown that a person’s degree of introversion or extroversion (it’s a spectrum; most people aren’t all one or the other) is 40–50% genetic.

Cain’s book is significant and useful because her key insights about introversion do more than offer hope for individuals; they suggest how our culture can best take advantage of the abilities of both personality types, particularly in the ways we educate and nurture our children, the ways we structure our workplaces, and the ways our organizations make group decisions.

Early in the book, Cain outlines what she believes to be a problem in Western cultures. Since the early twentieth century, we have increasingly favoured extroverted, gregarious people, those who have great social skills, speak well, and present their ideas with flair. When choosing and promoting leaders, we often wrongly equate the ability to speak well with high intelligence and good ideas. Cain quotes a successful venture capitalist as saying, “We put too much of a premium on presenting and not enough on substance and critical thinking.”

One of Cain’s many interviewees was Boykin Curry, managing director of investment at Eagle Capital. Boykin blames forceful extroverts for causing the global financial crash in 2008.

Research has shown that extroverts are more likely to engage in risky behaviour than introverts. Cain’s summary of the research on the “reward system” in the brain is one of many parts of the book that delves into the neuroscience of behavioural differences between introverts and extroverts. Extroverts appear to be more strongly influenced by the brain’s “reward system” than introverts. Extroverts are more responsive to the chemical dopamine, released when pleasure or rewards are anticipated. The implication is that organizations should listen to introverts when group decisions have to be made—especially in risky situations like those proceeding the financial meltdown of 2008.

Cain is critical about the prevalence of what she calls “Groupthink” in both schools and workplaces. Many workplaces and schoolrooms are designed to encourage interactivity and group work. However, studies have proved that people are most productive when they have privacy and can avoid distractions or interruptions. This is especially true for introverts, who need lower levels of stimulation than extroverts to function at their best. Moreover, the popular view that group brainstorming is the best way to generate creative ideas is a myth.

Research psychologist Anders Ericsson has devoted his life to figuring out what separates superior achievers from merely good or average achievers. Studying violinists at three levels of performance, he and his colleagues discovered that the key factor separating elite level musicians from lesser performers is the amount of time they spend practicing alone.

After studying excellence in many fields, Ericsson has concluded that it takes about 10,000 hours of what he calls “Deliberate Practice” to gain expertise in any field. Deliberate practice must be done alone; it is only then that a person can concentrate specifically on the tasks or knowledge that he needs to improve his own performance.

How is intelligence related to introversion/extroversion? According to IQ tests, both types are equally intelligent. However, introverts have different problem-solving strategies. They tend to be more persistent, more analytical, and more reflective than extroverts. Introverts are prolific contributors of society’s greatest ideas, inventions and creative works.

The first challenge for introverts is to not undervalue their own talents. They should not be afraid to devote long hours to their passions, even when (as often happens during adolescence) this is seen as strange or anti-social behaviour.

But introverts also need to be heard—to share their ideas and creative works. Cain examines the whole issue of whether introverts, who may be shy or withdrawn, can change to become outgoing, effective communicators of their ideas. Can introverts who are afraid of public speaking somehow “pretend” to be extroverts in order to get their messages across?

Quiet gives many examples of introverts who have answered this question affirmatively.

Professor Brian Little, a former Harvard University psychology lecturer and winner of the 3M Teaching Fellowship, defines himself as a true introvert but is a great public speaker. He created Free Trait Theory, which says “We can and do act out of character in the service of ‘core personal projects’.”

In other words, introverts can act like extroverts when they’re highly motivated, whether it’s to promote the work or key values they believe in, or to help the people they love. Brian Little’s core personal project is igniting his students’ minds.

Cain also shares the story of Jon Berghoff, an outstanding salesman. (He began selling knives as a high school junior, and is now the head of a huge personal coaching and sales training business.) Berghoff insists he’s an introvert. He says the most important quality of a good salesperson or consultant is the ability to listen well, because people respond positively when they feel understood.

Cain’s research has shown that the CEOs of successful companies are often introverts. Introverted leaders are more likely than extroverts to listen to ideas from subordinates, creating a “virtuous circle of proactivity” in which employees are encouraged to express their ideas.

Companies likely benefit from the leadership of introverted CEOs because they aren’t overly dazzled by “hype”, and are willing to listen carefully to the suggestions of both the extroverts and introverts within their organization. Our society is enriched by having a good balance between the “men of action” and the “men of thought”. Quiet will leave introverted readers with increased understanding and confidence about the powerful contributions they can make to the organizations they work for or their own self-driven personal work.