I don’t know the answers to these questions; I only know that over two months ago I was drawn into the orbit of David Shields’ book How Literature Saved My Life when I read a review about it in The Globe and Mail by André Alexis. The review itself was worthy of a blog post, but I decided to hold off until after I had read the book. Ever since then, I’ve been reading, re-reading, and trying to figure out how to write about it. Being engaged with a book’s ideas for over two months can count as an obsession, I think.

I can’t describe How Literature Saved My Life better than Alexis does in his review.

…a book that relentlessly relates instances or art (books and movies in particular) to the life of the critic. We have here a book in which a man seeks passionately to discover the personally relevant in art while, at the same time, looking for that thing (“truth” you could call it, I suppose) that transcends the personal, that allows for a break from the self.

Shields is the kind of reader who always wants to make connections between his personal experience and what he is reading. In view of this, I found it curious that Alexis, in his review, prefaces some of his comments by writing, “I hate inserting the personal in assessing a book…”

And I immediately had the reaction—“But I always do that! What’s wrong that?”

Then, after I read How Literature Saved My Life, I thought about the irony of Alexis “apologizing” for being personal in the context of a book that makes all criticism personal—the book’s title doesn’t lie about its intentions.

While struggling (at times) with A How Literature Saved My Life, I realized that both Shields and Alexis are more sophisticated, experienced, and cynical readers than I am. But Alexis is different from Shields. In The Globe and Mail review Alexis states, “It has been a long time since I expected anything of literature. I accept that what writers do is only tentatively meaningful or significant.”

This is a pretty cynical remark from a writer, I thought! Alexis goes on to write, “I’m more interested in what I might be able to do with literature than what literature does with me.”

It makes sense that a writer cares about what he “might be able to do with literature,” but I was still surprised that a writer wouldn’t be immensely involved in others’ writing as well. Yet though Alexis describes How Literature Saved My Life as “one of the oddest books I’ve read,” he is full of praise for it, and admits to being grateful that the book provoked him to ask, “Well, what is it we do when we read?”

Shields certainly makes it clear why he reads and what it is that he does when he reads.

He reminds us of Samuel Johnson’s words: “A book should either allow us to escape existence or teach us how to endure it.”

Shields rejects Johnson’s first reason for reading books; he finds “books that simply allow us to escape existence a staggering waste of time.” For Shields, reading is all about the second reason. He rejects not only “escapist” books but is repelled by what he calls the “tidy coherence” of traditional novels. He writes that this coherence “belies the chaos and entropy that surround and inhibit and overwhelm us. I want work that…foregrounds the question of how the writer solves being alive.” [italics mine]

Shields is obsessed with the “problem” of how we live when we know that death awaits us no matter what we do. How do we make our lives meaningful and not despair?

Knowing why Shields reads, it’s no surprise that he’s a big fan of David Foster Wallace.

Shields goes on to quote Wallace at greater length:

I strongly suspect a big part of a writer’s job is to aggravate this sense of entrapment and loneliness and death in people, to move people to countenance it, since any possible human redemption requires us first to face what’s dreadful, what we want to deny.

Shields’ reaction to the above is: “The only books I truly love do exactly this—”

[As an aside, I’d like to add my own reaction to Wallace’s work: I tried to read Infinite Jest a few years ago. I spent months immersed in it. I recognized Wallace’s genius; I was fascinated by the book, its obsessive, indulgent detail and perverse humour, but I had to give up halfway through—it was too much. On the other hand, I loved all the essays in A Supposedly Fun Thing I’ll Never Do Again—they were small “bites” of Wallace that my relatively “normal” intellect could handle. After reading “Shipping Out” I questioned whether I would ever go on a cruise.]

Of course, the irony is that literature couldn’t save Wallace; he committed suicide in 2008 at the age of 46.

[Aside #2: It seems terribly wrong that a mind as brilliant as Wallace’s could choose to extinguish itself. He had suffered from clinical depression for over 20 years.]

The above is the heading Shields uses for the section in his book describing the “fifty-five works I swear by.”

This section is wild, intimidating, inspirational, educational. It reflects what you could call either Shields’ morbid cynicism or relentless honesty about the human condition. His choices seem largely dependent on his personal relationships with the books; how are they relevant to him?

Shields reminds us that Tolstoy said the purpose of art is to transfer feeling from one person to another. Shields wants writing that does more than that. He describes a kind of writing called collage. In collage, the movements of the writer’s mind aren’t merely entangled with the work’s meaning, they are the work’s meaning. Collage is more than a transfer of feeling; it’s a transfer of consciousness. This is what Shields is after, and many of the books he has loved are collage-style (as is How Literature Saved My Life itself).

I haven’t read many of Shields’ Top 55, but his descriptions and quotes from many of them are alluring.

His biggest book obsession is with Renata Adler’s Speedboat, about which he comments, “I can’t read it anymore. It’s one book I’ve read so many times that I feel, absurdly, as if I’ve written it…I learned how to write by reading that book until the spine broke.”

He calls Lorrie Moore’s Anagrams her best book because of what one of its characters says: “There is only one valid theme in literature. Life will disappoint you.” 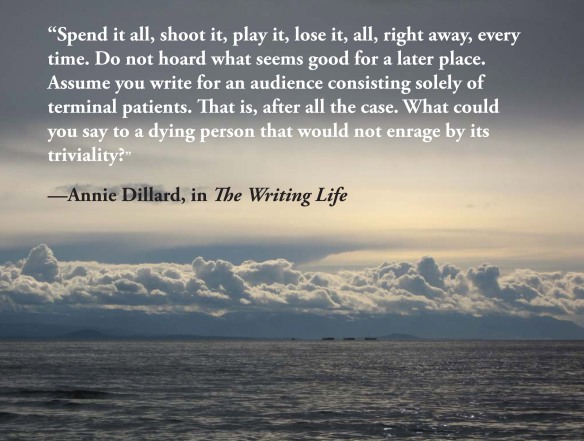 Shields provides examples of works of art whose richest material is not the apparent “subject” or the actual plot. For example, Ross McElwee’s film Bright Leaves “pretends to be about his conflicted relation to his family’s tobacco farm, whereas it’s really about the way in which we all will do anything—make a movie, smoke cigarettes, collect film stills, build a birdhouse, hold a lifelong torch for someone, find religion—to try to get beyond ourselves.”

Similarly, Frederick Barthelme’s ninth book, The Brothers, has a complicated plot that includes familiar Barthelme themes about middle-aged men’s ennui, divorces, relationships with younger women, etc., but “the novel’s true subject is Del’s attempt to reclaim his presence in the world by seeing it as breathtaking, as beautiful.”

Del says at the end of the book, “it was one of those nights when the air is like a glove exactly the shape of your body.”

Now that is a breathtaking and beautiful sentence.

My reactions to How Literature Saved My Life

I can deeply admire Shields’ writing, his humour, and his insights into great books without wholly sharing or understanding this statement: “We live in a culture that is completely mediated and artificial, rendering us (me anyway; you, too?) exceedingly distracted, bored, and numb.”

I agree that our culture provides us with endless choices and distractions. But a lot of the choices are stimulating and eye-opening. We can use self-control to avoid trivial distractions—maybe some people are better at this than others. Am I bored? Never. Am I numb? Never. I don’t even understand why Shields feels this way.

One of my biggest disagreements with Shields is his assessment of escapist literature and even the traditional novel. For me, one of the saddest paragraphs of the book was this one:

Forms evolve. Forms are there to serve the culture, and when they die, they die for a good reason—or so I have to believe, the novel having long since gone dark for me…

Has technology made the novel irrelevant?

According to Shields, the novel “was invented to access interiority”. In a culture where young people communicate mainly through social media and don’t seem to have the old notions about privacy, what purpose does the novel serve?

His other criticism of the novel is that “It’s nearly impossible now to tell a story that isn’t completely familiar and predictable.”

Do the above points mean the novel is no longer relevant? I think not. I’ll bet the vast majority of readers can still be enthralled by a well-told story. Maybe I’m a less jaded and more easily entertained reader than Shields, but to me it doesn’t matter if the great universal themes are repeated. Writers build new stories and new characters around these themes and tell their story using a unique voice; that’s good enough for me.

It’s certain that new forms of writing and communicating, made possible by the Internet, social media, e-devices, and other technologies, are competing for readers’ attention. I’ll admit I was astonished by this factoid: “By far the most popular novels of our era are interactive, plot-driven video games: 11 million people subscribe to World of Warcraft alone…”

Shields is cynical about the power of the Internet. He comments, “The power of the technology cancels itself out via its own ubiquity. Nothing really changes: the individual’s ability to project his message or throw his weight around remains miniscule.”

I don’t agree, though the Internet’s potential is a double-edged sword. It gives us all control of our own work and the way it’s marketed; there is the possibility of gaining a huge global audience, but at the same time we’re competing with a global pool of writers in a sea of distractions. You have to be gifted and pushy to get noticed, but it’s possible to be noticed by large numbers of people.

Can writing done in blogs and other forms of social media lead to the creation of good books? Rarely, says Shields, but it does happen, and he cites Justin Halpern’s Shit My Dad Says as an example. Shields admires the immediacy and “naked feeling” of the blog form. He says:

Books, if they want to survive, need to figure out how to coexist with contemporary culture and catalyze the same energies for literary purposes…Concision is crucial to contemporary art…The paragraph-by-paragraph sizzle is everything. [italics mine]

Does How Literature Saved My Life have that “paragraph-by-paragraph sizzle”?

Is it a “successful” book in today’s multimedia-heavy culture?

The answer, paradoxically, is yes and no. Yes, the book has concision, as Shields breaks it down into the short sections typical of a collage-style work. Yes, it has sizzle. Shields writes with brilliance and wit as he mines his own sexual experiences, character flaws and most despairing moments to illustrate his points.

Shields’ conclusion is a fitting summary of his book’s exploration: